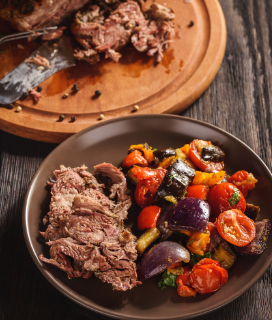 In the day-to-day decision about what to make for dinner, there can be a tendency to get into a rut. You find yourself eating the same things over and over forgetting that there are flavorful options just waiting for you to give them a try. Lamb shoulder is one of those options.

Lamb shoulder comes from a part of the animal that gets a significant amount of work. This results in meat that has a lot of great lamb flavor but is typically not a tender cut. This means you need to cook lamb shoulder for a longer period of time. To sum it all up, lamb shoulder is a perfect choice for stewing, braising, or slow cooking. For maximum flavor, leave the shoulder on the bone when cooking so that the meat falls apart with a fork when done.

Lamb’s shoulder has the benefit of being a juicier cut than say, a leg of lamb. This means it is much more forgiving if you leave it in the oven a bit too long. You will still have a juicy roast.

There is no better candidate for a slow cooker than a lamb shoulder and it is a nice change of pace from the more popular pork version. Throw this recipe for Crockpot Lamb Shoulder with Rosemary and Garlic in your crockpot before work and come home to a gloriously tasty meal perfect for a chilly winter night.

END_OF_DOCUMENT_TOKEN_TO_BE_REPLACED 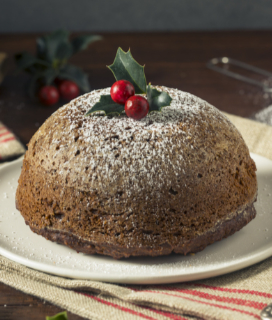 If you have been listening closely to the lyrics of your favorite Christmas carols or paying attention to traditional holiday stories, you may have heard the word suet used. There are plenty of words in those songs and stories that are unfamiliar. But, have you ever wondered just what suet is? And what is it used for?

Suet is a hard, crumbly saturated fat found around the kidneys that comes mainly from cows but can also come from sheep. The fat is removed from the meat, clarified, chopped, and then boiled in water—which removes any impurities. When the mixture cools, the fat and water separate. The fat is the suet. Suet has a high smoke point which makes it ideal for deep frying or for use in making pastries. Though, bird enthusiasts know it works well in birdseed cakes.

Suet has a fairly bland and mild flavor with a slight meaty scent. But, there is no meat flavor when cooked. It is used mainly in traditional British foods like puddings and pasties. And, it is probably most associated with mincemeat pie. Suet provides a richness to British puddings that you just don’t get from butter. And, when used in pie crust the result is a very flaky texture that stands up well to a wet filling.

You may see instances where the words suet and tallow are used interchangeably. But in fact, they are two different things. Tallow is the rendered fat from a cow. It’s a little complicated but the easiest way to understand the difference is that suet is an ingredient used to make tallow. Tallow is also more shelf-stable.

Suet can be difficult to find on this side of the pond as it’s difficult to store. And, frankly doesn’t enjoy the same following as our British friends. You can find it online though. And, it might be worth a try if you want to give a traditional figgy pudding a go. END_OF_DOCUMENT_TOKEN_TO_BE_REPLACED

If one item could embody all that is Thanksgiving, it would be a turkey.
But, not everyone likes turkey. Whether it’s because of flavor, texture, or even cost, a turkey aversion can make planning the big meal a challenge.

Good news! There are a number of possible turkey alternatives for Thanksgiving.

For those who want to go in another direction, the possibilities are endless.
We have an excellent list of festive roasts on this blog post. And, a few are highlighted below. END_OF_DOCUMENT_TOKEN_TO_BE_REPLACED

You’ve probably seen Cornish game hens in the meat case or even in the frozen section and wondered what they were and even more importantly, how do you eat them?

Cornish hens are the smallest of the commercial chicken family. Normally weighing between one to two pounds, they have a great chicken flavor with meat that is fall-off-the-bone tender. And, because of their small size and affordable price, they are the perfect one-person portion for dinner. They are also a great alternative at Thanksgiving for those who don’t like turkey.

Cooking a game hen is as easy as cooking a regular-sized chicken—although you do have to adjust the time down. Roasting is by far the best way to prepare these hens. However, nothing should stop you from braising or throwing a couple on your grill. Check out our recipe for Lemon-Rosemary Game Hens in our archive.

How To Roast a Cornish Game Hen
Roast game hens in a 45º0 F oven until a meat thermometer inserted into the thickest breast meat registers 155º F (about 20 to 25 minutes).

After you pull the chicken from the oven, tent it with foil and let it rest undisturbed for at least 10 minutes to let the temperature come up another five to ten degrees and enjoy!