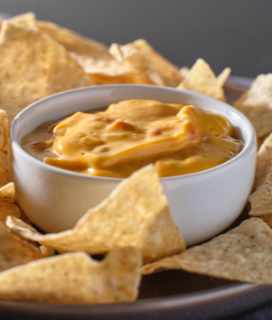 Say Cheese
My sister is a foodie just like me. Weekends are planned around baking schedules. Excuses to have a get-together are whipped up so that a certain cookbook can be taken for a test drive. Entire international vacation itineraries revolve around restaurants and the foods of far-off lands. We love good food. It is because of this love of all things culinary that she gets a rather large dose of ridicule for her love of queso.

You can call it queso, cheese sauce, or even cheese dip. But, no matter what you call it if there is a tray of semi-fresh tortilla chips with bright orange cheese sauce you bet my sister is all over them. The more bright orange and weird the queso, the better. So, it should come as no surprise that at a recent get-together there was a small, gently bubbling crockpot of queso.

The good news is that this wasn’t the queso that you pump onto chips at the ballpark. This was a different animal. This was queso that she made. And, fresh queso is a totally different experience. Yes, you might have to get past the fact that it is indeed still made with Velveeta—a product my mother only bought to put in our emergency earthquake kit. But, the results are worth it.

Real queso does not have that plasticky sheen and/or texture. Real queso is actually quite good and I will bet anyone that the loudest naysayers will be the same people who park themselves by the bowl and can’t stop eating it. (Guilty)

This is the recipe she made and it comes adapted from my favorite cookbook and restaurant Tacolicious. It’s one of their most popular items on the menu. Give it a try for Cinco de Mayo and see what you think… 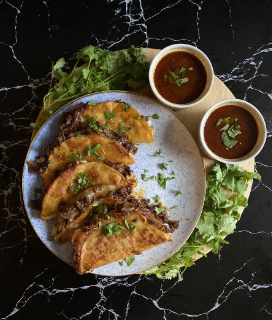 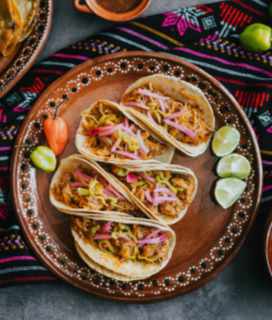 My husband could live on chips and salsa. It is by far his most favorite thing in the world behind ice cream and tacos which is why whenever we discuss planting a veggie garden, I always have to include the components for salsa. I have been making fresh salsa from our garden for forever. But, it wasn’t until the kids went back to school this year that my husband figured out how to do it himself.

My other half is one of the many who have been working from home for the past eighteen months—this wasn’t too awful. Since the kids were doing distance learning, he occasionally had people to talk to when they chose to come out of their caves. And, he had the option to send them to the store in the case of a salsa emergency.

Now that school is back in person and the kids are gone, the only one he has left is the dog. And, she can’t reach the gas pedal. So, out of desperation and in an attempt to use the tomatoes and chilies that we have coming out of our ears, he made his own salsa. And, it’s actually really good. (I say actually because his experiments can be well, concerning.) His salsa is even better if it sits for a day in the fridge and the flavors are allowed to meld. Beware though, this salsa is hot. By his standards, if you ain’t sweatin’ it ain’t worth it!

There is no actual recipe for George’s Garden Salsa which means it’s a little different each time. Everything is done by eye and taste testing. But, I have tried to lay it out the best I can below. Feel free to mess with it as you see fit. Roast the chilies on the grill, dial back on the heat, or add some avocado…it’s your canvas to do with as you please.

For those who like their salsa a little less chunky, throw half of the salsa (or all of it) in the food processor.