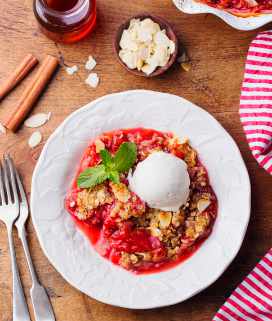 Rhu the Day
I am not really sure when I realized that I was a fan of Rhubarb. It’s not a plant you see a lot in Bay Area gardens, mainly because it prefers colder climates like in Washington and Oregon. That being said, I lived in Oregon for four years. There were plenty of berries but not a lot of rhubarb.

It’s only been in the last ten years or so that I have gone crazy for rhubarb. It took one great strawberry rhubarb pie to get my family hooked. For that reason, I feel compelled to try any rhubarb recipe that comes along.

Over the weekend we held a get-together for a friend who was in from out of town. This meant I was feeding a decent-sized crowd. The main course was easy to put together. Then, I went looking for something for dessert that was fresh, tasty, and said spring but would still feed a lot of people.

When I found this Strawberry Rhubarb Crisp recipe, I knew the search was over. This crisp was a big hit. My son said it was like crack…he couldn’t stop eating it.

I ended up doubling the recipe. But, even keeping the original proportion yields a decent-sized crisp. Don’t worry about leftovers. Even if you do end up with some, this makes an excellent breakfast.

This old-fashioned recipe has a generous, crisp oat topping to complement the tangy filling. The recipe is best served warm with Vanilla Bean Ice Cream. END_OF_DOCUMENT_TOKEN_TO_BE_REPLACED

Smoke Adjustment
Normally, when the temperatures get toasty, I do a lot of grilling. Grilling outside means that the house stays cooler inside. I had planned to write about cooking pizzas on the grill for this week but, circumstances being what they are, grilling isn’t an option.

Once again the Golden State is dealing with horrific fires that have burned thousands of acres, destroyed homes, and taken lives. And, all of that on top of an ongoing pandemic. It’s emotionally and physically exhausting. Not to mention devastating to those who are experiencing it first hand. The air quality just does not lend itself to outside pizza making.  But, I’m still in the mood to make some pizza. So, I have been looking for alternative ways to get my cheese and carb fix.

I found this recipe for Focaccia-Style Sheet Pan Pizza in a recent copy of Milk Street magazine. While it does qualify as pizza, it is not your typical neighborhood delivery type pie. It’s actually got a crust more like focaccia. (Okay, my mouth just started watering at the mention of focaccia…) The dough for this crust is pretty wet, so the trick to making this sheet pan pizza is to not use fresh mozzarella and to top it with ingredients that do not have a lot of moisture to keep the top from getting too soggy. You can try regular pizza sauce—but use it sparingly. Lightly brushing it on with a pastry brush would be ideal. This is what I have had to do because the original recipe called for sliced up cherry tomatoes on top and that is a no go for a few people in my household. You just want enough to give it some tomato flavor without wetting it down. Also, if you want a little more bang for your buck, you can chop up some fresh rosemary to add to the crust dough to give it some tasty fresh flavor.

Upper Crust
Thanksgiving can be stressful. That is no great revelation. The stress can come from many sources. For some, it’s having their entire family under one roof and the tension that can cause. For others, it can be the actual meal preparation. I’ve had numerous conversations over the years about what stresses people out about the Thanksgiving meal. For some, it’s the cooking of the turkey. For others, it’s having enough drippings for a really tasty gravy. But, without a doubt, the thing that causes the most stress, at least according to the people I have spoken to, is the pie crust.

I can’t really speak for other families, but in mine, the pie course of the Thanksgiving meal is extremely important so when the pie crust doesn’t work it’s a problem. Last year my daughter and I were responsible for the making of the pies and because I didn’t want to ruin Thanksgiving, I did a lot of research on pie crust. I tried A LOT of them. I basically landed on two that I thought were the best. One is a traditional half butter and half shortening pie crust. This is the pie crust I use year-round for everything from sweet pies to pot pies.

The other is a crust that uses a technique I had never heard of before that comes from Japanese bread baking that uses a cornstarch “gel” as the moisture for the pie crust. I was intrigued to say the least. The recipe was created by Christopher Kimball of America’s Test Kitchen fame but can be found along with a video on the Williams Sonoma website and on YouTube.

I used this crust for my pecan pies last year and the results were amazing! It’s very easy to work with and rolls out beautifully. The crust was flaky and tender but held up well to the filling. I have yet to try it on a two-crust pie, like apple. My sense is that it might be too “short” for that kind of pie but you never know.

If you are in charge of the pies this year and have some time this weekend to experiment, give this crust a try. I don’t think you will be disappointed.

Pie on the Fly
Last Saturday, my sister and I grabbed our buckets and boxes and set out for Brentwood to pick fruit. We picked a lot of fruit. Peaches, pluots, cherries, and blackberries. I personally harvested almost 9 pounds of blackberries. And, I felt the fruits of that labor for an embarrassing two days after. I gathered that much because I had a jam plan for the blackberries and I wanted to make sure I had enough for a double batch.

Turns out I had more than enough to make the jam as well as a fresh blackberry pie.

My grandmother had a huge blackberry bramble in her garden and we used to pick blackberries every year to make in to jam. But, she also had a killer recipe for blackberry pie. And, I have no clue what that recipe was. Maybe she just eyeballed the sugar and cornstarch and threw it and the fruit together in a pie crust. But, for the life of me, I can’t find a copy of her pie recipe, or for that matter her jam recipe, anywhere.

So, while my jars were processing, I went on a hunt for a blackberry pie recipe. You think it would be easy—but you would be wrong. Most of the pies that have blackberries in them also have other fruits and I wanted a straight up blackberry pie. I never found one that was quite right. So, I eventually just combined a bunch of different recipes into one and went with it.

Turns out my Blackberry Pie on the Fly was darn tasty. In fact, the scent of the pie and our impatience prompted us to cut into it before it had finished cooling—which was a mistake. The blackberry goodness inside did not stay inside and oozed out of the crust into the pie plate. Note to self, the pie must be allowed to cool completely. The visual did not affect the flavor though and all traces of pie were gone by morning…