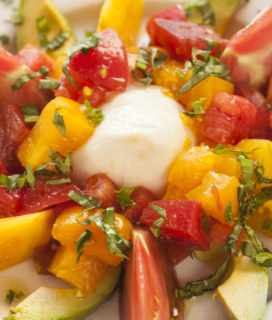 Gam’s Tomato “Salad”
My grandmother was a fool for summer tomatoes. She grew them in her giant garden. And, what she didn’t eat fresh she then canned to have them all throughout the year. I could be wrong, but I think she really grew them so that she could have a sliced tomato sandwich. My mother had the same addiction. The two of them would go bananas over sliced ripe tomatoes on white bread.

I will say that they had it right in one respect. When it comes to fresh homegrown tomatoes, the simpler the better. Why would you hide all that fresh tomato flavor (that you have been craving for the past year) under way too much sauce? Nowhere was this more apparent than when my grandmother would make what my sister and I refer to as Gammy Salad.

To call it a salad would be stretching the truth quite a bit. She would slice fresh tomatoes and layer them on one side of a plate. On the other side, she would slice up avocados and arrange them artfully. She would then sprinkle a little bit of Italian dressing over both sides and finish it all off with a big dollop of mayonnaise in the center and some salt and pepper. I know what you are thinking, “You had me up until the mayonnaise.” The truth is, it’s kinda good.

Better yet…one bite of this and I am immediately transported back to summer Sunday night dinners when I was nine.

For the past week or so I have been making various versions of the Gammy salad because it’s August and my tomatoes are all turning ripe at the same time. The mayonnaise version has definitely made an appearance. But, I think my new favorite version replaces the mayo with some fresh burrata. Sometimes I include some sweet cantaloupe if I am feeling sassy. 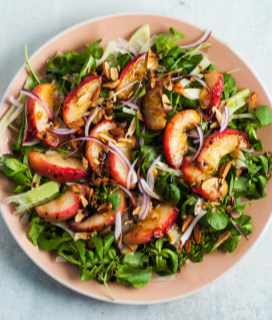 Peachy-Keen
I have a thing for fruit trees. When we first moved into our house 12 years ago, we planted rootstock for 14 different fruit trees. I had this bucolic vision of walking through my orchard with my children, laughing and snacking while picking the seasonal fruit we found there. Life, water issues, and bad soil said hold my beer…

Two years ago, my wonderful children gave me a peach tree for my birthday. We planted it in the now vacant chicken area of our property. It goes without saying that the previous occupants helped make the soil much better on this part of “the farm”. We had peaches the first year—though they never matured. The tree was too young to support their growth. The second year was the same. This year was bonkers.

We had at least a bushel of softball-sized sweet peaches. It was glorious. I use the past tense here because they are now all gone. Some we ate right off the tree. Some were used in Saturday morning scones. Some were shared with appreciative friends and family. Others were quartered and put in the freezer. Many of these beauties found their way into evening salads. Sometimes we grilled them, sometimes we didn’t. You be you…

One of my favorite summer salads is a recipe for my Summer Stone Fruit Salad that I posted a while ago—it is still a good one. I have since updated things a bit.

Peaches are still going strong in the marketplace. So, give this updated version a go if you find yourself with some ripe sweet peaches. 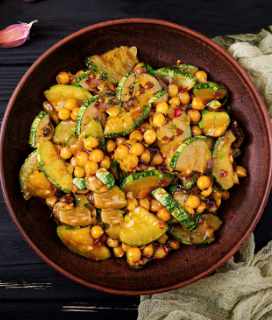 Lotsa Squash
If you have a zucchini plant in your backyard, chances are you are running out of ideas for how to use your bounty. In my house, we are partial to this Zucchini Bread recipe from The New York Times. It’s ridiculously good. The problem is we can’t go around eating nothing but cake—much to the disappointment of our inner ten-year-old.

There are plenty of non-baked good ways of using your zucchini. You could spiral it and use it like pasta, or you could pickle it for a new twist on a summer favorite. Mediterranean cuisine is an excellent place to look for zucchini recipes. Yotam Ottolenghi has some really tasty ideas in his collection of books and/or online.

I found the recipe for Zucchini with Chickpeas and Peanuts on The New York Times website. I can’t quite call it Mediterranean cuisine—though the flavors and ingredients would suggest that it is.

I have modified it to my own tastes in that I like a little bit more cumin and I felt it needed a little garlic. Also, the original called for Sumac. I prefer to use Za’atar which has Sumac in it as well as other warming spices. 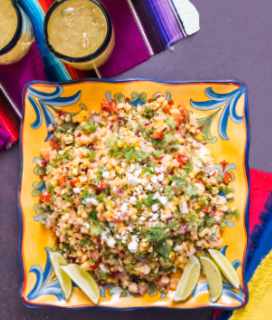 Corn on the Side
Summer dinners tend to be a lot easier to produce. There is very little in your fridge that can’t go on the grill. Chicken, fish, beef, and veggies can all take a turn over the flames. The same is true when it comes to your side dishes.

Since you are going through the trouble of heating up the grill, might as well get the most out of it. If you’re like me, you have garden zucchini coming out of your ears. It’s easy to toss some with a little olive oil and salt and pepper and throw it on the grill next to your steaks. Corn is another great vegetable to put on the grill. You can leave it in the husk and grill it as is for on-the-cob greatness. Or, you can grill it husk-free for the Grilled Corn Salad recipe below.

Just prep the ingredients before you start grilling and while your meat is resting, throw it all together for a tasty smokey side. Bonus points if you grill the peaches too…