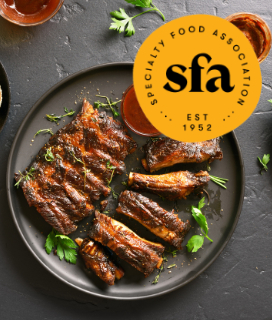 You So Fancy
I spent the last few days in Sin City for the 2023 Fancy Food Show. Normally this show is held in San Francisco. But, for reasons beyond my knowledge, they moved it to Las Vegas. And, I am not sure if that was such a great idea. The show seemed a bit smaller to me, although that may have more to do with businesses closing than reluctance to go to a different city.

This was the first show since the height of the pandemic. So, I was looking forward to attending and hoping to see what’s new in the industry. I was also hoping that the move to Las Vegas would mean the show itself would be bigger and, frankly, more worth the expense of having to travel. To be fair, we have been spoiled by the fact that the show has been in our own backyard for decades.

In a nutshell, I was disappointed. But, that in and of itself tells me more about the state of the fancy food world than anything else. Bottom line is that while there were a few products and trends that were new, the food world is still trying to play catch up from multiple years of shutdowns, supply chain issues, and more recently, inflation. That being said, there were definite highlights.

Alcohol-Free Spirits
You may have noticed that Dry January is a thing. (Just ask Martha Stewart) The idea of not drinking during the month of January after all the revelry for the holidays is immensely popular. So popular in fact, that it has spawned a number of product lines devoted to sophisticated alcohol-free spirits and aperitifs for mixing some interesting mocktails with the thought that January doesn’t have to be the only dry month.

One such company is Abstinence Spirits. Their line of botanical non-alcoholic spirits works well with your favorite club soda but can also be a surprise addition to your favorite full-octane creations when you’re in the mood. And for the champagne lovers who want all the bubbles but not the buzz, Prima Pavé has something tasty for you to try. While their Blanc de Blanc will never fool a true champagne connoisseur, the attention to detail in their “wine-making” process produces a high-quality non-alcoholic alternative that is as good on its own as it is as a mixer.

Snacks
Snacks are always a big category for the Fancy Food Show and this version was no different. There were plenty of sweet, salty, and spicy options to satisfy any craving you could come up with—and some of them are kind of outside of the box. For instance, I am that person who loves crispy, crackling chicken skin from a roast chicken. Flock Foods has seen fit to challenge all those pork rind producers with the poultry version. And, I am here for it. My other favorite caught me by surprise. MushGarden mushroom chips aren’t necessarily new per se. But, they are new to me and I was surprised to find myself eating the sea salt version one after the other.

Asian Flavors
The flavors of Asia from Korea to India to Thailand and Malaysia were on full display across all sorts of categories proving that if you like your meals spicy, hot, and fragrant, there will be plenty of options to choose from.

Southern-style
I found my favorite flavor a little closer to home though with Chilau Foods Southern-style flavor bases. Think Better Than Bouillon but for gumbo and shrimp and grits. I’m looking forward to giving these a whirl.

All in all, I was glad we went to the 2023 Fancy Food Show if only to get the creative juices flowing again. Keep an eye out for these and other products in the coming weeks as it might take a bit of time to work out all of the logistics of adding new items.

These typical shrimp and grits are served for breakfast, but they are good any time of day. We love the addition of bacon!
Yields 2 Servings

Directions
Add the water to a heavy-bottomed saucepan, and drop in the butter. Bring to a boil. Stir in the grits, return to a boil, and reduce the heat, allowing the grits to cook at a low boil for 10 minutes or so, until the grits are very
thick and have absorbed most of the water, stirring occasionally to prevent the grits from sticking.

Add about 1/2 cup of the milk or cream to the pot and turn down the heat, allowing the grits to simmer for another 10 minutes or so. Add more cream or milk as the liquid is absorbed. Cook the grits until they reach the desired consistency. They should be full-bodied enough to chew, and not runny. The total cooking time should be at least an hour.

*If you only have unsalted butter on hand, add 1/4 teaspoon salt to the grits.

Prepare the Bacon
Separate 1/2 pound of bacon, and cook the bacon to render the fat according to your favorite method. Remove the bacon from the pan, and set aside. (Learn how to make perfectionist bacon.)

Strain and reserve the fat. When the bacon cools, chop it into 1/4-inch pieces.

Prepare the Shrimp
Put the shrimp in a medium-sized mixing bowl and sprinkle it with the lemon juice, salt, and cayenne. Set aside.

Heat the bacon grease in a skillet and sauté the onion and pepper over medium heat until the onion begins to become transparent (about 10 minutes). Sprinkle the flour over the vegetables and stir continuously until the flour begins to brown (about 2 minutes).

Add the shrimp and about 3/4 cup water or stock, stirring continuously. While stirring, turn the shrimp so that they cook evenly. Cook for an additional 2 to 3 minutes, until the shrimp are cooked through and the gravy is uniformly smooth. Thin with a little extra water or stock if necessary.

Serve immediately over the grits, and sprinkle with chopped bacon and parsley (optional).