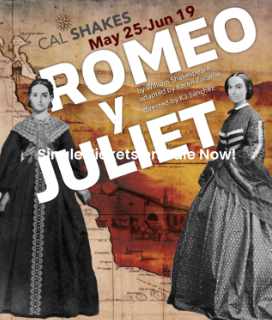 It’s time to reserve your summer seats for some great theater under the stars. The Cal Shakes 2022 Summer season begins this month. And, if you have never experienced this unique blend of food, community, and theater…now’s your chance!

The season opens with Romeo y Juliet, Shakespeare’s most iconic tale of young love presented in a bilingual adaptation by Karen Zacarías. Director KJ Sanchez returns to the Bruns after a national tour of Cal Shakes’ 2018 hit Quixote Nuevo to reimagine these star-crossed lovers!

In the fall, playwright and Oakland-native Marcus Gardley, known for his critically-acclaimed black odyssey at Cal Shakes, returns with Lear, a modern verse translation of Shakespeare’s King Lear. Set in San Francisco’s Fillmore District from the eminent domain crisis through to the subsequent displacement of the 1960s, and infused with a jazz score, Gardley’s deeply personal Lear reckons with uncomfortable legacies, with the consequences of our actions, and with the vulnerability and ultimate resilience of the human heart to find its way back again.

What’s Happening at the Bruns?
As part of the Season of Shared Light, Cal Shakes is opening up the Bruns Amphitheater to arts and cultural institutions from around the Bay Area. From May to October, safely enjoy concerts, dance performances, opera, and much more.

Summer Conservatory—Outdoors at The Bruns
Grades 6-12
The Cal Shakes Shakespeare Conservatory will take place safely outside at the Bruns Amphitheater this summer! Students will develop and improve their performative skills by studying with Bay Area experts in such areas as Acting, Voice, Movement, Stage Combat, and more, all while rehearsing one of Shakespeare’s most beloved plays for a performance on the Bruns stage.