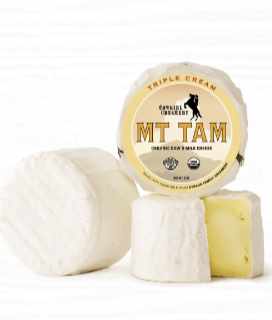 Organic triple cream with a heart.
Cowgirl Creamery Mt Tam cheese just flies off our shelves. It is well-loved by both our staff and our customers. It has all the lusciousness you expect from a triple cream, with a unique core that upholds its texture. We like to think of it as Brie’s quirky Californian cousin.

About Cowgirl Creamery
The San Francisco Bay Area is fanatical about cheese, and so much of our local enthusiasm is owed to the two chefs who created Cowgirl Creamery, Sue Conley and Peggy Smith. At Piedmont Grocery, we are huge fans of Cowgirl Creamery. They were at the forefront of the American artisan cheese movement, and are still making award-winning cheeses in delicious variety, using milk from nearby dairies.

In 1997, Sue Conley and Peggy Smith opened Cowgirl Creamery in picturesque Pt. Reyes Station. They started with an old barn, made it beautiful, put in a small plant for making hand-crafted cheese, and bought organic milk from the neighbor, Straus Family Creamery.

In the past 12 years, they have grown and moved their operations to Petaluma. Cowgirl Creamery cheeses are sold to over 500 stores, independent cheese shops, farmers markets and restaurants, and national supermarkets. Still, Cowgirl Creamery makes cheese from organic milk supplied by three small farms in Marin and Sonoma Counties.

Sometimes you just need to try a new cheese. So, pick up some Cowgirl Creamery Mt Tam.