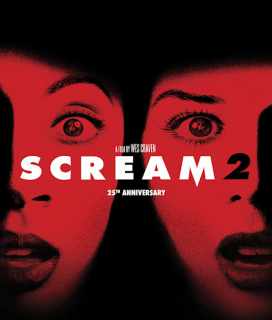 25th Anniversary in Theaters October 9th & 10th
Check out this 1996 slasher thriller on the big screen. Scream follows a high school student and her group of friends in the fictional town of Woodsboro, California, who become the targets of a mysterious killer in a Halloween costume known as Ghostface.

The film satirizes the clichés of the slasher genre popularized in films such as Halloween, Friday the 13th, and Craven’s own A Nightmare on Elm Street. Scream was considered unique at the time of its release for featuring characters aware of real-world horror films who openly discussed the clichés that the film attempted to subvert.

The plot
Away at college, Sidney Prescott (Neve Campbell) thought she’d finally put the shocking murders that shattered her life behind her… until a copycat killer begins acting out a real-life sequel. Now, as history eerily repeats itself, ambitious reporter Gale Weathers (Courteney Cox), Deputy Dewey (David Arquette), and other Scream survivors find themselves trapped in a terrifyingly clever plotline where no one is safe or beyond suspicion.

We love the idea behind Fathom Events, to use local movie theaters to show performances—including classic movies, concerts, opera, and dance. Plus, there are no bad seats in the house!