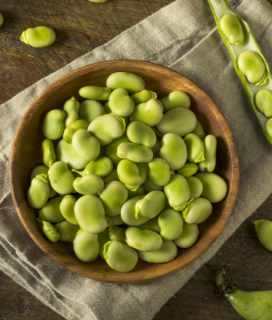 Fava beans arrive in our store for a fleeting period in the spring. And we are certain to use them in all kinds of dishes while they are available. They are fresh and remind us that it is, indeed, spring!

Fava beans, also known as broad beans, are a springtime crop that is grown and eaten around the world. They are a species of vetch, a flowering plant in the pea and bean family that are widely cultivated worldwide as a crop for human consumption, as well as as a cover crop.

This versatile bean can be used for salads, stews, sauces, fillings, snacks, and more. Preparing Fava Beans involves first removing the beans from their seed pods, and then steaming or boiling the beans to loosen and remove their exterior coating. Fresh, unshelled beans can be stored in a plastic bag in the fridge for up to 10 days.

Dried beans can be found year-round at Middle Eastern and Greek markets, and frozen beans can sometimes be found in the frozen aisle at grocery stores.

History
Broad beans have a long tradition of cultivation in Old World agriculture, being among the most ancient plants in cultivation and also among the easiest to grow. Along with lentils, peas, and chickpeas, they are believed to have become part of the eastern Mediterranean diet around 6000 BCE or earlier.

Here are two of our favorite dishes using Fava Beans.

Ragout of Fava Beans, Peas, and Asparagus with Pecorino & Crispy Prosciutto
This recipe is adapted from Tante Marie Cooking School in San Francisco.