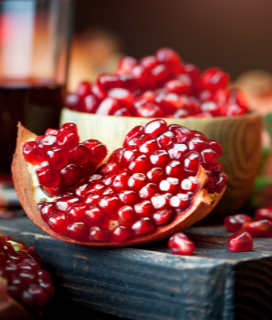 Nothing says fall like a pomegranate.
This ancient fruit is one of the oldest known to man, and there is no wonder pomegranates survived in culinary circles since the Ancient Greeks and Egyptians.

You can relish the meditative act of picking each, individual jewel from its casing and savoring the pop between your teeth. We have a more efficient process if you are preparing the fruit for a recipe.

Here is a messy and exciting trick we learned from a chef:
Cut the pomegranates in half crosswise, along their widest diameter, and hold one half over a large bowl. With a heavy, wooden spoon whack it along the rim. There is a sweet spot where the seeds will fly out into the bowl (and beyond). Don’t be shy. Keep your fingers out of the way and give it your best shot. You can even play the game of trying to empty the fruit in three whacks.

Once you have collected all the seeds, fill the bowl with water, and the pith will float to the top. Scoop it off the surface and strain the seeds.

Fresh seeds are great in green salads and fruit salads. You can also try adding them to cranberry sauce and holiday stuffing recipes.