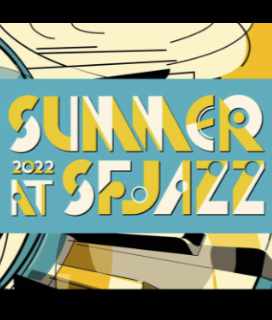 SFJAZZ will present more than 40 shows over 12 days for the festival’s 39th annual season. Performances will take place at the SFJAZZ Center’s Robert N. Miner Auditorium and Joe Henderson Lab, the Herbst Theatre, and the Paramount Theatre in Oakland.

SFJAZZ Summer Sessions encompasses six weeks of programming arranged into curated, thematic weeklong mini-festivals based on the concept of the Great Americas Songbook. This theme takes the idea of the American song tradition and extends it to the entirety of the “the Americas,” encompassing North, Central, and South America.

Beginning in 1983 as a two-day event originally called the Jazz in the City, the San Francisco Jazz Festival has continually expanded over the past 39 years to become a globally renowned institution presenting the greatest names in music from around the world.

ABOUT SFJAZZ
Founded in 1983, SFJAZZ presents the greatest names in jazz, Latin and global music and nurtures the art of improvisation through its year-round concert, commissioning, and education programs. The West Coast’s biggest jazz presenter serves over 200,000 fans and students every year and has several award-winning resident jazz ensembles – the world-renowned SFJAZZ Collective and the SFJAZZ High School All-Stars.

SFJAZZ Center opened in 2013 in the vibrant performing arts district of San Francisco. The luminous SFJAZZ Center was designed by San Francisco architect Mark Cavagnero and the LEED-Gold certified center offers the superb acoustics of a great concert hall and the relaxed intimacy of a jazz club.

Tickets are now on sale! Learn more about the summer season and the complete lineup on the SFJAZZ website.