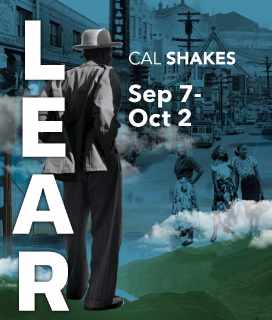 Returning to Cal Shakes after his acclaimed production of black odyssey, Obie-winning playwright, Marcus Gardley brings his world premiere production of Lear—a deconstruction of the classic story of power, betrayal, and madness—to the Bruns Memorial Amphitheater.

Lear is presented in partnership with Oakland Theater Project and Ply on Shakespeare.

Grounds
Are open 2 hours before the show and the cafe will be serving food and drinks.

Bart Shuttle
It is running 2 hours before the show and half an hour afterward to and from Orinda BART. Look for the Shuttle Bus that says Cal Shakes.

Dress
Check the weather before you go! It gets very cold at night. Lots of layers, coats, and blankets are recommended!

Content Warning
This performance includes heightened depictions of violent acts, including abuse, murder, and mutilation. If you need to step away during the performance, house staff will assist you when you are ready to return.

Location
The Bruns Amphitheatre is located at 100 California Shakespeare Theater Way in Orinda, about 7 miles from Berkeley and Oakland, just off Highway 24. There’s free parking onsite.

Get all the details and purchase tickets on the Cal Shakes website.