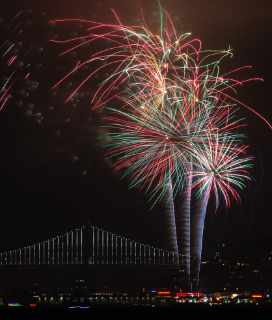 How are you celebrating July 4th this year?
There are plenty of ways to celebrate July 4th in the Bay Area. We’ve got parades and music as well as contests and fireworks. So, if you are interested in some old-fashioned fun, there is plenty to be had.

This year, July 4th falls on a Monday. So, please note that some Independence Day events are spread throughout the holiday weekend or even earlier.

Here is our list of events arranged alphabetically by cities throughout the East Bay and beyond:

Alameda
July 4th Pre-Parade 5K To Benefit Midway Shelter. Begins at 9 AM before the parade.
Alameda’s 4th Of July Parade is the longest in the nation with a 3.3-mile route.
USS Hornet July 4th BBQ & DJ. Happens on the flight deck. Tickets are on sale.

Albany
4th Of July Concert In The Park. Pack a picnic, and enjoy!

San Pablo
July 4th Celebration at the Community Center. Pre-registration is required, and no fireworks this year.

San Rafael
June 30th through July 4th Fireworks Extravaganza at the Marin County Fair. Choreographed extravaganza over the lagoon for the run of the fair.