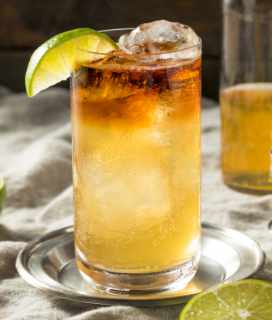 The Dark ’n Stormy is a delicious, simple-to-prepare, three-ingredient cocktail featuring a refreshing mix of dark rum, ginger beer, and lime. It’s a close cousin to the Moscow Mule which is made with vodka, ginger beer, and lime. Lore has it that it was named by sailors who said they would not sail under “those skies.” However, we promise it goes down smoothly!

The cocktail has been popular over the years and can be found in bars across the world. However, the brand Gosling’s Black Seal Rum owns the registered trademark. So, technically, it’s not a Dark ‘n Stormy unless it’s made with Gosling’s. Whatever you do, make certain to use a dark rum (definitely not spiced) for the full flavor and visual effect.

The other variation on the drink is the lime juice. We love the pleasant citrusy kick—it adds a fresh flavor. Some recipes call for it while others omit. If you are ordering one in Bermuda, for example, it will be served sans splash of lime.

Directions
For a gorgeous visual effect, build the ingredients in a highball glass with ice cubes.

Garnish the cocktail with a lime wedge.