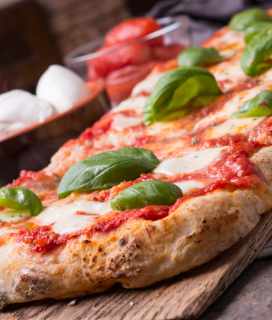 That Focaccia Pizza
I think we all remember the bread-baking phenomenon that happened during the height of the pandemic. Most of us were up to our elbows in sourdough just out of sheer boredom. While all of that was going on, you may have missed the rise (no pun intended) of focaccia production that happened simultaneously.

Fresh homemade focaccia is ridiculously good. There is an episode of Samin Nosrat’s Salt Fat Acid Heat on Netflix that shows her making focaccia while on location in Italy which is the epitome of performance art. And a sure-fire way to bring on hunger.

Focaccia on its own is wonderful but focaccia as a base for pizza can be on a whole other level. One of my boys is the lone fan of fluffy pizza in a family of New York style devotees so he rarely gets the high-carb pizza that he loves because he is always outnumbered. Focaccia pizza is a great compromise. It’s hard to not like focaccia. To be clear, focaccia pizza is not the same as a deep-dish pizza. Using pizza dough to make focaccia will not give you the same results.

What you decide to put on your focaccia pizza before you bake it is entirely up to you. Just remember that less is more so that you can taste the amazing flavor of the focaccia as well as the toppings. Pro tip: add a layer of mozzarella before you add your sauce. This will keep the focaccia from getting too soggy.

Directions
Proof the yeast
Combine the warm water, yeast, and sugar in a small bowl. Put the bowl in a warm place (inside the oven with only the light on is good) until the yeast is bubbling and aromatic (about least 15 to 20 minutes).

Make the dough
In the bowl of a mixer fitted with a dough hook, combine the flour, 1 tablespoon of the kosher salt, 1/2 cup of the olive oil, and the yeast mixture on low speed. Once the dough has come together, continue to knead for 5 to 6 minutes on a medium speed until it becomes smooth and soft. Give it a sprinkle of flour if the dough is really sticky and tacky.

Alternatively, you can mix and knead the dough by hand.

Transfer the dough to a clean, lightly floured surface, then knead it by hand 1 or 2 times. Again, give it another sprinkle of flour if the dough is really sticky and tacky.

Allow the dough to rise
Coat the inside of the mixer bowl lightly with olive oil and return the dough to the bowl. Cover it with plastic wrap and put it in a warm place until the dough has doubled in size (about 1 hour or more).

Form the focaccia
Coat a jelly roll pan with the remaining 1/2 cup olive oil. (Yes, 1/2 cup. Trust us on this.)

Put the dough onto the jelly roll pan and begin pressing it out to fit the size of the pan. Turn the dough over to coat the other side with the olive oil. Continue to stretch the dough to fit the pan. As you are doing so, spread your fingers out and make finger holes all the way through the dough to create the characteristic focaccia surface.

Allow the focaccia to rise again
Put the dough in a warm place until it has doubled in size (about 1 hour). Toward the end of the second rising, preheat the oven to 425º F.

For focaccia
Liberally sprinkle the top of the focaccia with some coarse sea salt and lightly drizzle a little oil on top. Bake the dough until the top of the loaf is golden brown, about 25 to 30 minutes. Remove the focaccia from the oven and let it cool before cutting and serving.

For pizza
Assemble your pie as you would any pizza. Note that if you put the cheese UNDER the sauce, the crust will be less soggy. Bake the pizza for about 25 to 30 minutes. Remove the focaccia from the oven and let it cool before cutting and serving.