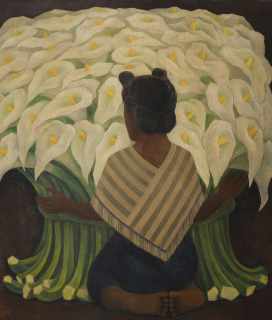 The most in-depth examination of the artist’s work in over two decades, Diego Rivera’s America brings together more than 150 of Rivera’s paintings, frescoes, and drawings—as well as three galleries devoted to large-scale film projections of highly influential murals he created in Mexico and the United States.

Rather than surveying his entire career, the exhibition focuses on Rivera’s work from the 1920s to the mid-1940s, when he was conceiving a new vision for North America informed by his travels in Mexico and the U.S.

Ten thematic galleries are dedicated to places like Tehuantepec and Manhattan that captured his imagination, and to his favorite subjects, such as street markets, popular celebrations, and images of labor and industry.

Diego Rivera’s America exhibition will be in the SFMOMA galleries through January 2nd, 2023.

You can learn more here and purchase tickets at the SFMOMA website.