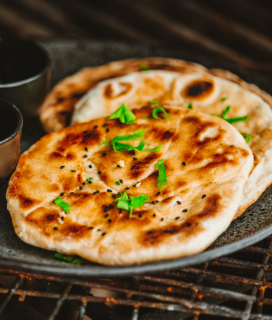 This recipe for homemade naan turns out delicious, soft, puffy, airy, bread with beautiful golden brown spots on the surface. They taste just like the best Indian buffet restaurants!

Directions
Proof the yeast
In a small bowl, add the sugar, warm water, and yeast together. Stir to combine well. The yeast should be activated when it begins to foam (about 10 minutes).

Make the dough
Transfer the flour to a flat surface and make a well in the middle. Add the yeast mixture, yogurt, salt, and oil. Knead the dough until the surface becomes smooth and shiny (about 10 minutes).

Allow the dough to rise
Cover the dough with a damp cloth and let it rise in a warm place until it doubles in size (about 1 hour).

Make the bread
Divide the dough into 8 equal portions. Roll each piece of dough into an 8-inch circle using a rolling pin.

Cook the naan
Lightly grease the surface of the cast-iron skillet with some flavorless oil. Please the skillet on the stovetop on high heat. Place one piece of dough on the skillet. When it puffs up and dark spots appear, flip it over and cook the other side.

Repeat until all the dough is cooked. Brush each piece of naan with melted ghee or butter and serve hot.