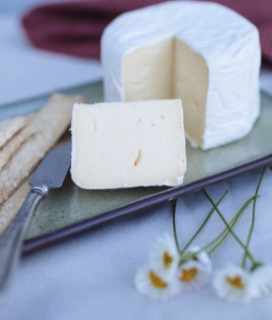 If you are looking for some locally-crafted, very delicious cheeses, Nicasio Valley Cheese Company makes some of our favorites. At Nicasio, the cows are milked on their ranch early in the day, and the milk is rushed to the creamery that same morning to make the cheese. You can’t get fresher than that!

Nicasio cheese makes fantastic additions to your charcuterie board, in sandwiches (grilled cheese!), in baked macaroni or risotto, and in all your favorite recipes.

That dream became reality in 1919 when he established the Lafranchi Dairy in the western Marin town of Nicasio. The desire to create Swiss cheeses in California was the genesis of Nicasio Valley Cheese Company. Today, all their cheeses are made from 100% organic farmstead cow’s milk.

Here are the cheeses that we carry:

Formagella
Made in 3” rounds with a velvety white exterior, this is the mildest of our aged cheeses, similar to a Camembert or Brie.

Locarno
A delicious creamy brie made in wheels and aged for at least 5 weeks. It is creamy around the inside of the rind with a chalky interior that gets creamier as it ages or warms.

Foggy Morning with Basil and Garlic
Restrained notes of organic basil and garlic are infused in our creamy Foggy Morning. This cheese is excellent on its own or paired with either savory or sweet accompaniments.

Nicasio Square
Nicasio’s first washed-rind cheese, with a golden-orange rind and a distinctive aroma and flavor, reminiscent of a Taleggio. It is the winner of numerous State, National, Good Food Awards, and a Top 5 finisher in its class at the World Cheese Championship.