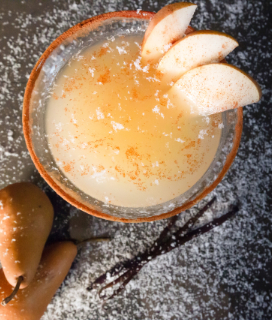 his seasonal, Pear Spice Cocktail is reminiscent of crisp fall days. We plan to sip it in front of the fireplace with friends and family. And, the flavors are perfect for the holidays.

Bourbon pairs beautifully with both the fruity pear flavor as well as the warm baking spices. And, we bet you will find plenty more uses for the clover simple syrup in both your cocktails and cooking this season. The cinnamon sugar rim adds a nice aromatic perfume of cinnamon and a slightly bitter-sweet flavor. To keep the cocktail from getting too sweet, mix your cinnamon sugar 2/3 cinnamon and 1/3 sugar.

Directions
Make the Clove Simple Syrup
Bring water and sugar to a boil in a small saucepan and remove the pan from the heat. Add the cloves and allow them to steep until the syrup has cooled. Strain the cloves and store the simple syrup in a sealed jar for up to 2 weeks in the fridge.

Mix the drink
Combine the bourbon, Clove Simple Syrup, lemon juice, and bitters in a mixing glass and stir to combine. Pour the mixture over ice in the cinnamon sugar-rimmed glass and top with the pear hard cider. Garnish with pear slices.