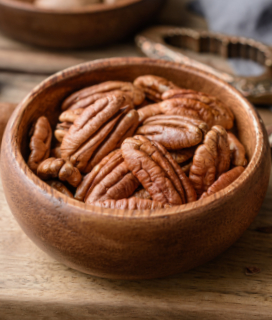 Pecan pie probably ranks second only to pumpkin at the Thanksgiving table. Pecans are the perfect fall harvest nut and their taste blends wonderfully with autumn flavors.

Pecans are delicious, with a rich, buttery flavor and a natural sweetness. We love them fresh, toasted, and used as an ingredient in favorite dishes—especially desserts such as pecan pie. Butter pecan is also a favorite flavor in cookies, cakes, and ice creams. Pecans are the main ingredient in American praline candy.

About Pecans
The pecan is a nut from a species of hickory trees native to northern Mexico and the Southern United States. The nut is a nutrition powerhouse loaded with vitamins and minerals. Wild pecans were well known among native and colonial American and they have been cultivated in the South since the 1880s. Pecans are very popular in the cooking of the Southern states. In fact, the pecan is the state nut of Alabama, Arkansas, California, and Texas and is also the state tree of Texas!

A pecan, like the fruit of all other members of the hickory genus, is not truly a nut but is technically a drupe, a fruit with a single stone or pit, surrounded by a husk.

Stop by the store to pick up some fresh pecans or even a pecan pie.