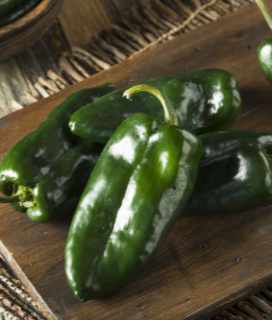 Chili peppers add both heat and flavor to some of our favorite dishes. And, poblano chili peppers are a variety that we reach for often. This love of peppers is reflected in the aisles of our store by the variety of peppers both, fresh, dried, and preserved that we offer to our customers.

Poblanos are one of the most popular peppers in Mexican cuisine. They originated in Puebla, Mexico. When ripe, they are green with an elongated heart shape. The poblano pepper is not considered a hot or spicy pepper, though they do have a small amount of heat. Poblano chili peppers are flavorful, large, and their skins are thick. This makes them perfect for stuffing and roasting. In fact, they are often roasted and peeled for recipes. When dried, they are called ancho chiles.

Flavor Profile
Poblanos are sold green. They taste similar to a green bell pepper with a little more kick. Cooking poblanos mellows them even more, making them slightly sweet. If you allow a poblano to ripen further, they turn red and tend to be spicier than unripe, green peppers.

Preparation
In preparation, poblanos are commonly dried, coated and fried, or stuffed. They make a delicious addition to salsas and moles. They are often roasted and peeled to remove the waxy texture. And, they can be preserved by canning or freezing. Their dried form, ancho chili peppers, are also extremely popular and form the base for many sauces and other recipes.

Do you want to try poblanos in a recipe? Check out our recipe for Chiles Anchos Rellenos de Queso (Cheese-Filled Poblano Chiles) on our blog, The Kitchen Table.