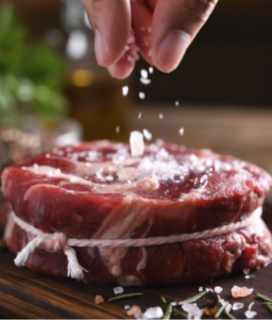 If you are cooking meat, chances are the first thing you will be told to do is salt it.

Have you ever wondered why? Sure, the obvious answer would be because it adds flavor, which is true.

Also true? Salt can make your meat taste meatier, juicier, and smell more appetizing. But that’s not the only reason for salting your meat before cooking so (Nerd alert!) dust off your middle school science textbook and let’s get started.

Do you remember those cell diagrams we all did and the experiments to demonstrate osmosis? Well, here’s one of the reasons we learned those things. (Whether you retained that knowledge is a totally different issue). Any recipe involving meat, whether you are grilling, roasting, or sautéing, will instruct you to salt your meat and let it rest for a certain amount of time. The reason you let it sit for a bit is that during the time the salt is dissolving in the exterior moisture of the meat you are using and drawing even more moisture out of the meat and bringing it to the surface.

Now, if you remember, osmosis is the primary means by which water is transported into and out of cells with the main objective of achieving a balance of moisture. So, since the salt has drawn out moisture from the meat and dissolved in that same moisture, the nature of osmosis then draws that moisture back into the meat along with the dissolved salt. The salt then breaks down the structure of the meat fibers and proteins thus making the meat more tender.

The longer you let meat sit with salt on it, the more tender your meat. Keep in mind though, salting meat is how they make jerky so if you leave it on too long and expose it to the air…well, you get the idea.

Brining does essentially the same thing as salting but in reverse. When you make a brine for a piece of meat like a pork loin, you are making a salt solution that is more dilute than the liquid in the cells of the pork. Once again, the cells in the pork are going to want to balance so they are going to draw the brine into the cells of the pork. The salt in the brine then alters the muscle fibers and proteins of the pork allowing those cells to hold more moisture, usually about 10% more. Meat that is cooked will lose approximately 20% of its moisture during the cooking process. So by brining your meat, not only will the salt in your solution make the meat more tender, but you will also cut the moisture loss almost by half, the result being a juicier pork loin which is why brining is recommended for leaner cuts of meat.

See kids? All those evenings crouched over a poster board with your colored pencils were worth it!