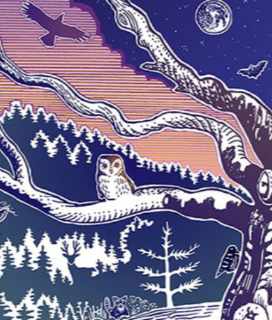 The films will be organized such that the first half of the program is more appropriate for kids, with films created from the perspective of Youth, and films focused on animals. The second half will delve into a few topics in more depth with films that are slightly longer.

The Films
Finding Salmon—Follow 11-year-old, Keyona, into a wondrous world of trees, water, and friendly fish… and find the spirit of Salmon Watch, a program that connects Oregon youth to their backyard river ecosystems.

The Magical Forest and the Things—Dave and Callie (6 years old) spent the first three weeks of Covid19 distancing in a make-shift shared studio now called the Quarantine Attic. It’s an original story depicting a critical yet child-like observation of human consumption habits and the social reinforcements that influence it.

The Facemask—A facemask whisks away through the skies, traversing across the city on its way to the coast, threatening to end its journey at the bottom of the ocean.

I am Cheo—Cheo wants you to be the change we want to see to protect Mother Nature.

Cormie: The Pickpocket Cormorant—A rescued cormorant will go to any lengths to help her wildlife center stay afloat.

Shaba—After losing her mother to poachers, an unruly elephant named Shaba is rescued to the mountains of northern Kenya to be rehabilitated back to the wild. The women keepers of Reteti Sanctuary have a maternal solution to soften Shaba’s heart.

Oshkigin: Spirit of Fire—Shows the ways that traditional fire uses can reconnect us with the land and preserve the natural world.

After Ice—The glaciers of Southeast Iceland reflect our past and reveal our future.

Guardians of the River—Klamath River Indigenous leaders and youth fight to free their river from life-killing dams, restoring salmon, economy, and culture.

The Last Last Hike—83-year-old Nimblewill Nomad is about to become the oldest person to thru-hike the Appalachian Trail.

Learn more about the films, and register on the Open Space Trust website.