For the past few years, I have been part of the Chef of The Month group, who create a series of dinners, that is auctioned off at our school fundraiser each Spring. Last year I was Ms. October. This year I am Ms. November and I’ve decided to walk on the wild side. I am doing a Moroccan Feast.

I became a lover of Moroccan food sort of by accident. There is a scene in the movie Sabrina where Julia Ormond and Harrison Ford are eating in a Moroccan restaurant, and she talks about how much she loves the food. It made me want to try it. (I know, weird, but there ya have it) From the first bite I was hooked. It is a cuisine with complex flavors derived from cinnamon, onions, tomatoes, olives and fragrant spice blends. Moroccan cooking means a lot of lamb as well as a whole lot of fish and seafood. And lemons. Don’t forget the lemons.

When we lived in Oakland before we were married, my husband and I used to hold a Moroccan dinner for all of our friends. I would decorate the apartment with pillows and multi-colored tablecloth,s and force them to sit on the floor and eat with their hands. It was great fun, and the food was amazing. A few friends even ate to the point of pain. The bodies were still there the day after. 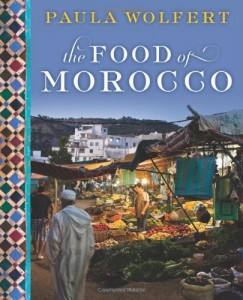 I haven’t hosted one of those dinners in a while, so I am looking forward to re-creating it for the Chef of The Month club. It is hard work coming up with the perfect menu, but I have it figured out. While doing my research, I came across some old favorites that I haven’t made in a while. The Fish Tagine below from Paula Wolfert’s The Food of Morocco is one of them. It’s perfect for those of us who find ourselves in a dinner rut.

This recipe, from the Atlantic coast city of Agadir, is very good with a firm-textured white fish, such as sea bass, cod, or monkfish.

Directions
To make the charmoula
Toast the cumin seeds (not necessary if they are Moroccan) by tossing them in a hot dry skillet over medium heat for about 1 minute.

Blend the cumin seeds, garlic, and salt to a paste with a large mortar and pestle. Moisten the paprika, black pepper, cayenne, turmeric, and saffron with 2 tablespoons water. Add the spices, herbs, and oil to the garlic mixture and blend until smooth. Add the onion and 3/4 cup water and blend to a smooth, velvety puree. (Makes about 3 cups.)

Wash the fish under cold running water. Trim off any skin, cut into small dice, and reserve. Pat the fish dry and cut into 1-inch chunks. Place the fish and cinnamon stick in a bowl, add 1/2 cup of the charmoula, and toss. Cover and refrigerate for 1 to 2 hours.

Meanwhile, arrange the tomato slices side by side on sheets of paper towels lightly dusted with coarse salt. Dust the tomatoes with salt, cover with more paper towels, and press down to help absorb excess moisture. Leave the tomatoes to dry out until they are ready to use.

Arrange the diced fish skin, if you have it, the potatoes, zucchini, and red bell pepper in an 11- to 12-inch tagine or sauté pan over medium-low heat. Pour over the remaining charmoula and slowly bring to a boil. Cover and cook until the vegetables are tender and the sauce is thick (about 45 minutes). Remove and discard the cinnamon stick. (The tagine can be prepared 1 to 2 hours in advance up to this point; let stand at room temperature.)

About 30 minutes before you are ready to serve the tangine, preheat the oven to 400°F.

Gently reheat the tagine over low heat. Remove the fish from the refrigerator and toss with the lemon juice. Spread the fish chunks and dried tomatoes on top of the cooked vegetables. Transfer to the oven and bake, uncovered, for 10 minutes. Transfer the hot tagine to a wooden surface or a folded towel to prevent cracking.

To serve, decorate the tagine with cubes of preserved lemon, olives, and chopped cilantro. Preserved lemons are available to purchase, and you can also ,find a recipe here. Note that they need to be made about three weeks in advance.