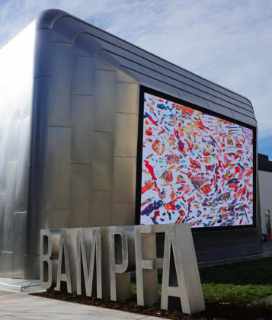 Complementing Indelible Moments in the Barbro Osher Theater, BAMPFA is partnering with the Downtown Berkeley Association to present free outdoor films at BAMPFA on the streets of Berkeley. Bring a blanket or lawn chair to the huge outdoor LED screen on Addison and Oxford Streets and enjoy the show.

Would-be tough guys Franz (Sami Frey) and Arthur (Claude Brasseur) have little better to do than drive around Paris and act out scenes from B movies. But when they team up with Franz’s English-class crush, wide-eyed Odile (Anna Karina), to plot a burglary, they stumble into the gap between playacting and reality. Godard said, “it is not the people who are important, but the atmosphere between them.” The atmosphere arises not only from the actors’ interplay—their dance in a cafe and their sprint through the Louvre are among the most memorable and joyous moments in Godard’s cinema—but from Raoul Coutard’s exquisitely bleak cinematography and Michel Legrand’s jaunty, melancholy score. Pauline Kael called the film “like a reverie of a gangster movie. . . . It’s as if a French poet took a banal American crime novel and told it to us in terms of the romance and beauty he read between the lines.”

“Do the Right Thing is bright and brazen, and it moves with a distinctive jangling glide,” J. Hoberman wrote for the Village Voice. “Set on a single block in the heart of Brooklyn on the hottest Saturday of the summer, it offers the funniest, most stylized, most visceral New York street scene this side of Scorseseland.” In its portrayal of simmering racial tensions escalating toward tragedy, the film is, in Hoberman’s words, “a daring mix of naturalism and allegory, agitprop and psychodrama.” Lee recalled: “Rosie Perez dancing. People were not ready for the opening of that film. That opening is a part of cinematic history.”

Learn more about the free outdoor films at BAMPFA website.