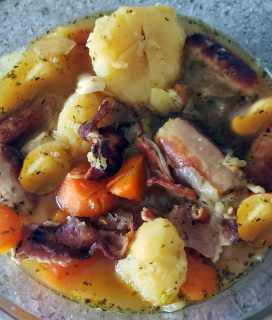 Coddling
There I was, minding my own business reading my email when a message popped up in my Inbox that I couldn’t ignore. It was a recipe that made me stop in my tracks (so to speak). I don’t want to say this kind of thing happens all that often. But, occasionally something will appear in my email that makes me stop all other activities and take a look. Nine times out of ten it is because the recipe is for something I have never heard of. And, the rest of the time it is because the picture shows something that just looks so good that I have to just stop and stare. This particular occurrence was a combination of both.

It is mid-March which means there have been plenty of St. Patrick’s Day food ideas being spread around the online food world. And, this message definitely qualifies. I am a big fan of Irish food. I eat it. I cook it. And while I am certainly not an expert on Irish cuisine I would say that I am comfortable enough with it to not be surprised. I was wrong. Until that message arrived in my Inbox, I had never heard of an Irish Coddle. Irish stew? Yes. Irish Soda bread? Certainly, just not an Irish Coddle. Obviously, I had to do some research.

Traditionally, a coddle is a means to use up any leftovers so, more often than not, there is no actual recipe to follow. You just work with what you have. Judging by the recipe in my email, working with what you have will yield a dish that is the epitome of comfort food. How can you go wrong with bacon, sausage, potatoes, and onions? The idea so excites my food nerd self that I have been telling friends about this recipe when talking about St. Patrick’s Day plans at high school baseball games. Needless to say, this is what we’re doing for St. Patty’s Day.

The traditional recipe for an Irish Coddle varies from family to family. And, also varies according to what is in the fridge. For example, we have included carrots as an option in this recipe. You could opt to use another root vegetable or omit them entirely.

The main components of an Irish Coddle are bacon, sausage, potatoes, onions, and plenty of black pepper and fresh parsley. Finishing it off with some stout yields comfort food perfection.

Directions
Preheat the oven to 300º F.

Prep your ingredients
Cut the bacon and sausage into 1-inch pieces. Halve the onions and slice them thinly. Finely chop the parsley and peel and quarter the potatoes. Peel and cut the carrots into 1-inch lengths (if using).

Remove the pot from the heat and use a slotted spoon to transfer the bacon and sausage to a plate.

Assemble the coddle
Drain the fat from the pot and return it to medium heat. Add the onions, a pinch of salt and 1/4 cup of water. Use a wooden spoon to scrape the brown bits from the bottom and sides of the pot.

Sprinkle the onions with 1 tablespoon of the parsley and plenty of black pepper.

Bring the liquid to a boil (don’t stir!), then cover and transfer to the oven.

Bake the coddle
Bake the coddle until the onions are very tender and caramelized and the liquid has reduced slightly. Check halfway through to add more water if needed (about 2 hours).

Finish with a pour of stout, if using, and a final garnish of the remaining parsley.