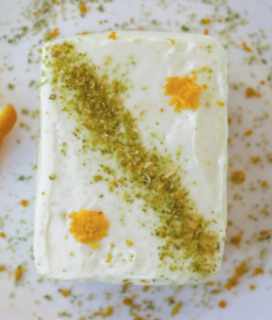 What’s in the (Ice) Box?
If you are looking for an easy Summer dessert that requires no heat and very little effort, look no further that the icebox cake. Its name may bring to mind Leave it To Beaver-type visions of the 1950s. But, in fact, its origins are even older than that. Icebox cakes are the original no-bake dessert!

When refrigeration arrived in the home during the 1920s, ice box cakes became very popular. Usually, they were made by layering cookies or graham crackers between layers of cream and fruit. Then they were then left to set in the ice box until ready to serve. Companies like Nabisco “conveniently” helped the rise in popularity by printing icebox cake recipes on the boxes of their Famous Chocolate Wafers and Nilla Wafers.

One of the best things about icebox cakes is that they are infinitely customizable (as long as you have cookies of some sort and cream). What you add to that is completely up to you. The most popular versions tend to go with chocolatey combinations like Oreo cookies and cream. Graham crackers can be used to make a s’mores version. And the banana cream version with Nilla Wafers is soooo good.

Personally, I am a fan of Amy’s Lemon Icebox Cake. And, for that, I go with Nilla Wafers, although you could also use shortbread cookies to class it up a bit…whatever floats your boat.

On a hot day, the fresh taste of lemon can be just the thing to satisfy your sweet tooth without being too sweet. Just remember to plan for the time it takes to set. I like to use mascarpone because it’s lighter than a traditional cream cheese but you could use either.

Assemble the cake
Spread 1 to 2 tablespoons full of the cream cheese mixture onto the bottom of a 9″ x 13″ dish. (This will prevent the cookies from sliding around.) Then cover it with a single layer of Nilla wafers. Top the cookies with about 1/3 of the mascarpone mixture. Use an offset spatula or the back of a spoon to spread the mascarpone into an even layer. Drizzle this layer with approximately 1/2 of the lemon curd and lightly swirl it in.

Cover the curd with another layer of cookies and repeat, finishing with a layer of the mascarpone mixture.

Set the icebox cake
Cover the dish with plastic wrap and freeze for 3 hours.

To serve
Remove the cake from the freezer and decorate it with any of the garnishes you are using.

To store
Freeze any leftovers for up to 7 days.